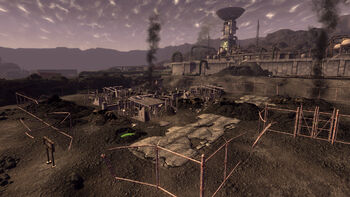 Boom Town is a mock settlement set up for the express purpose of testing the performance of Saturnite artillery shells. It is paired with the X-7a “Left Field” artillery launch facility. The entire area is irradiated as a side effect of weapons testing, with craters full of green radioactive material.

When fast traveling to “Boom Town,” arriving will reveal a bombed-out building with an Old World Flag painted in red on the wall, left by Ulysses.

In the real world, a site nicknamed “Survival Town” was used to test the Apple-2 nuclear bomb at the Nevada Test Site on May 5, 1955. An assortment of buildings including residential houses were populated with mannequins and stocked with different types of canned and packaged foods to study the weapon’s impact upon the structures and items. Formed in 1975 in Dublin The Boomtown Rats exploded out of Ireland in ’76 and their fast, loud, furious music and their fast loud furious attitude meant they became part of the burgeoning punk scene. Singer Bob Geldof’s defiant motormouth arrogance and flagrant disrespect for authority endeared him and his band to every youth who felt weighed down by the heavy-handed blandishments of church and state. In the UK The Boomtown Rats first toured with the Ramones and Talking Heads rocking and mocking the status quo alongside the Sex Pistols, The Clash, The Jam and The Stranglers. They became one of the biggest bands of the late 70s/80s with a string of top ten hits and platinum albums, earning them Brit Awards and Ivor Novellos. Making history as the first Irish band to have a UK no 1 hit with ‘Rat Trap’, they went on to top the charts in 32 Countries with ‘I Don’t Like Mondays’ and racked up 6 era-defining albums: ‘The Boomtown Rats’ (’77), ‘A Tonic For The Troops’ (’78), ‘The Fine Art Of Surfacing’ (’79), ‘Mondo Bongo’ (’80), ‘V Deep’ (’82) and ‘In The Long Grass’ (’84).

Once famously described as ‘licentious, festering reprobates’ and ‘leprous anti-establishment scumbags’ and banned from playing in their home country, it’s difficult to overestimate the shock and awe The Boomtown Rats inspired in late 70s Ireland. Fronted by “one of Irelands greatest lyricists” (Hot Press), they set out to “disrupt, disturb and question what it meant to be young in the Ireland of the mid-70s”.

In 1984, inspired by a TV report on the famine in Ethiopia, Bob Geldof organized the star-studded Band-Aid and co-wrote “Do They Know It’s Christmas,” one of the biggest-selling singles in history. The next year he organised Live Aid. In the intervening years, Geldof’s profile as a campaigning spokesman may have overshadowed his music career, but the seeds of his activism can be heard in the grooves of all those Boomtown Rats’ hits and in his heart, he’s just a humble song and dance man anyway.

Says Bob: “Age, curiosity and cash prompted our interest in getting together again. Curiosity about each other and what we did together in the ’70s and ’80s. Curiosity about those songs that seem to have endured and the music and band that powered them. When I sang again Rat Trap, Looking After No 1, Mondays, Someone’s Looking At You, Banana Republic, She’s So Modern etc, there was nothing I would change. On rehearing, on re-signing them I understood that they could have been written yesterday. The circumstances within which they were written hadn’t changed. Tragically and unfortunately I could sing those words with utter conviction. This isn’t nostalgia, rather perhaps a time to be angry again. Time to go back to Boomtown. If only for a short while. ”