To help slow the loss of heat rising from the plants and the ground, and to protect the moisture in the plant cells from freezing, build a simple frame around the plants and cover them before sunset using breathable material such as burlap, newspaper, cardboard, or even old bed sheets (avoid plastic which doesn’t allow moisture to escape), and secure with clothespins or giant binder clips. Uncover the plants in the morning to release any moisture and allow them to warm up. If the temperature stays low, leave the plant covered.

When the weather report suggests frost, protect plants by watering them thoroughly before sunset. Once the sun sets, much of the stored heat in the ground has dissipated. The soil will release moisture into the air around the plants throughout the night, keeping the air a couple of degrees warmer.

Most plants respond well to being covered, but delicate foliage may not survive, even with the extra insulation. If plants succumb to a frost, leave the damaged parts intact as they will provide some insulation from further frost damage. The key is to be prepared.

Or use commercial coverings designed to protect plants. These units may look more attractive than an old bed sheet, but a sheet does work just as well.

Another way to collect heat in the garden is to paint glass milk jugs black and fill them with water. Place them around any sensitive plants. The idea is that water loses heat at a slower rate than soil or air, so the collected heat will radiate outwards throughout the night, protecting the plants from frost.

As the growing season shifts to winter mode, our attention turns to protecting food plants and flower beds and baskets for as long as possible. Watch for the first signs frost, which sneaks in on a clear windless autumn night. Fog or cloud cover tends to prevent a frost by trapping the heat that would otherwise escape skyward. Frost occurs when temperatures drop to just below freezing. Why all this frost watch diligence? Frost causes ice crystals to form in plant cells and thereby damages the cell walls. Leaves then shrivel and turn brown or black and the plant is doomed.

For smaller plants, make a mini greenhouse for each plant by cutting the bottoms off milk or soda jugs, removing the cap, and placing them over the plant. The plants stay warm and any condensation escapes through the top. Remove these in the morning. Alternatively, dig up the plants and move them indoors.
If possible, move container plants inside or into a greenhouse. They can also be covered and wrapped, with a layer of insulation such as burlap or bubble wrap around the pot to protect the roots. Or, bury the pot in the ground and cover the plant with newspaper or old sheets. At the very least, provide protection by moving them against the side of the house or shed. 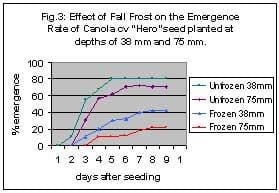 It is important to talk to the lab before submitting the seed sample to confirm which pathogens will be identified, the price for the test, the procedure used and how to submit the sample.

Germination can decrease in the bin over the winter, especially if the seed was green, frost or mechanically damaged, or had high moisture content at harvest. For seed lots of questionable quality in the fall, it is a good investment to conduct another germination test in the spring to make sure the quality did not decrease further in the bin.

Research has indicated that bran frosted wheat could be used for seed, provided the 1,000 kernel weight was close to normal, and germination levels are high (Type B). Damaged seed showing significant shrunken or shrivelled kernels should not be used for seed (Type C and D).

The U of S results also showed that canola seedlings had the most significant frost injury compared to flax and wheat, as shown in Figure 3. Whether sown at 1.9 cm (0.75 in.) or 3.8 cm (1.5 in.), very few seedlings emerged from the frozen seed lot and emergence occurred over eight days. The plants were also small and spindly. This was likely due to the fact that canola was the smallest of the seeds tested and, consequently, most subject to reductions in energy reserves.

Any crop treated with glyphosate for pre-harvest weed control should not be used for planting seed as poor seedling vigour and emergence can occur.

Different crop types will suffer different degrees of damage due to the way crops develop during the growing season. If food reserves within the seed are adversely affected, the quality for future propagation will be reduced. If good quality seed is in short supply, it may be advisable to secure your seed supply as soon as possible and test for seed quality.