OG Kush makes up the genetic backbone of West Coast cannabis varieties, but in spite of its ubiquity, its genetic origins remain a mystery. Popular myth maintains that Chemdawg and Hindu Kush parented OG Kush, passing on the distinct “kush” bud structure we see in many strains today. However, we can’t be sure because OG Kush first came from bag seed in the early 90s. The earliest propagators (now known as Imperial Genetics) are said to have brought the seeds out of Florida to Colorado and southern California, where it now flourishes. There are many different phenotypes of OG Kush, some of which include Tahoe OG, SFV OG, and Alpha OG.OG Kush is cherished for its ability to crush stress under the weight of its heavy euphoria. It carries an earthy pine and sour lemon scent with woody undertones, an aroma that has become the signature of OG Kush varieties and descendants. With OG Kush, patients most commonly cite improvements in migraines, ADD/ADHD, and stress disorders.

Early Girl is the wallflower of cannabis strains since its introduction in the 1980s. Lovingly preserved by the breeders at Sensi Seeds, this strain is lazy and relaxed, nothing over the top. A 75/25 indica-dominant hybrid, Early Girl is a good one for those new to cannabis who would like relief from stress. Also a great strain for novice growers, it’s compact, resilient, and has a particularly short flowering time of 7 to 8 weeks. Early Girl grows especially well outdoors, but won’t put up a fuss if she’s stuck inside.

Hobbit by Kannabia Seeds is a resilient autoflowering variety with sweetness and strong elemental resistance. This strain has a sweet aroma that has been described as “strawberry candy” and an equally sweet smoke with latent earthy notes. Hobbit deftly combines stimulating Haze elements with a pervasive body buzz that is lightly weighted while remaining pleasant and functional. Many growers covet this autoflowering wonder for its quick 65-day flowering time and above-average yield.

Superglue is a hybrid strain bred by Seedism Seeds. A cross between Afghani and Northern Lights, Superglue inherits indica growth patterns along with a sweet caramel and pine aroma. Superglue brings calming relaxation to the mind and body, but leaves you functional and energetic enough for social activities or a productive afternoon.

White Ryder is Riot Seeds’ attempt to create a ruderalis version of White Widow by crossing Buddha Seeds’ White Dwarf against Lowryder. By blending two stout, autoflowering plants, Riot Seeds created a potent indica-dominant hybrid that finishes in under 80 days and can easily be hidden from view. Enjoy this flower for anti-anxiety and sleep-inducing effects.

Growing cannabis can be an arduous process. Beyond the space, materials, and nutrients needed, time and light are the most essential ingredients in the cannabis cultivation equation. But what if you’re impatient or short on time? Is there a way to speed up the growing process?

The fast-flowering cannabis strains listed below are now emerging for professional and hobby growers to utilize. They’re perfect for novice growers as well as set-it-and-forget-it growers who want to squeeze out a harvest with little time to spare. The list includes a mixture of both photoperiod and autoflowering varieties so you can find the perfect plants for your setup. 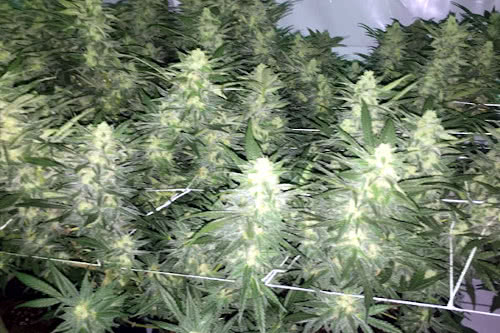 Pineapple Haze is a big-yielding mostly sativa strain that comes from Afghan x Skunk, crossed to Haze. One of the most productive cannabis varieties, it especially thrives when grown outdoors.

Northern Lights x Big Bud is one of the highest yielding strains to grow indoors, made by crossing two famous heavy yielding cannabis strains—Northern Lights and Big Bud. This nearly pure-indica hybrid grows more like a sativa while still having the fast flowering time of an indica.