Red Dwarf is a special Skunk variety strain that is an extremely rare auto-flowering plant. It possesses cannabis ruderalis genetics, which is the third type of marijuana plant (aside from indica and sativa). Ruderalis is said to have grown in the Soviet Union and Russia in general and is known for its ability to thrive in harsh climates.

If you decide to grow Critical Kush, be VERY careful when using it! It has an exceptionally high THC content of up to 25% and is capable of hitting you like an express train. It is 100% a marijuana strain for late evening or night time use because it induces couch-lock fairly quickly.

This is an extremely alluring strain developed by Kannabia Seeds. Noted for producing a high yield despite a short flowering time of 65 days, this auto-flowering marvel is becoming very popular. It is a balanced hybrid and a cross of Ginger Ale and an unknown Ruderalis strain. As a consequence, Hobbit is a fairly balanced mix of sativa, indica, and ruderalis, a rarity in the world of weed.

In this guide, we have located ten marijuana strains that grow exceedingly quickly; the best short flowering strains as well as the quickest autoflowering seeds. Imagine finding a strain capable of flowering in just seven weeks! We have included auto-flowering and photoperiod options to increase the likelihood of you finding the perfect marijuana strain for your needs. Before you start, lease make sure that it is legal to grow cannabis in your state of residence and that you remain within the legal limits.

A lot of new growers don’t seem to realize that growth slows down every time your plants gets sick. Every new issue adds days, or even weeks to total growth time if you don’t solve it at warp speed. Key problems to look for include pest infestation, nutrient burn or deficiency, light burn, and heat stress.

As you can probably guess, Hobbit was named after the famed characters from the Lord of the Rings novels. While its THC content can be described as ‘above average’ at 15%, it is not a strain that will knock you flat out. Indeed, the high is every bit as balanced as one might hope, which means it can be used in the morning, evening, or at night. For most users, it is the strain of choice when they wish to relax with friends and have a day of pure laziness.

In addition to cannabis strains with short flowering periods, there is a second classification of speedy weedy options, which are referred to as auto-flowering strains. 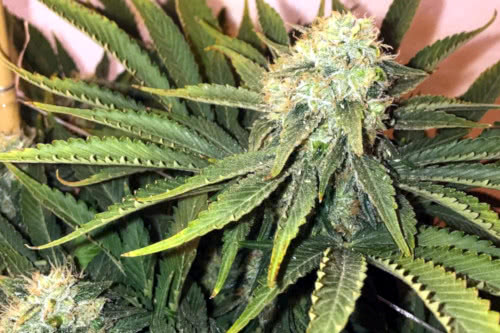 Disclaimer: Know your laws. Read federal and local/county laws before buying seeds online. We do not promote or undertake in illegal activities.

Fast Bud #2 Auto seems one of the exciting options. But I haven’t tried it. Can anyone share how exactly would it be?

Alaskan Purple Auto by Seedsman, one of the best seed banks, is a 90% indica purple weed strain that produces good yields in a short time. It finishes growing at 8 weeks from seed, with some phenotypes ready to harvest at week 7. They are easy growing, sizable plants for an autoflowering strain that mature one week later when grown outdoors. Ripe, fruity sweet flavors, and 15–20% THC content.