Aeroponics ensures that your plants grow close to one another. Therefore, there is no problem with plants desperately seeking soil territory. As a result, you can grow more cannabis in less space than before.

First and foremost, aeroponics is not for the amateur gardener. If you don’t already possess vast knowledge of marijuana cultivation or agriculture in general, aeroponics is not for you. Despite its many advantages, things can go wrong very quickly when you use an aeroponics system. For example, if you suffer a power outage, your roots won’t receive enough water. As a result, they will dry out quickly, and the entire root system can die.

You will need to use spray nozzle attachments to deliver the water. The water released from the nozzle is in a fine mist, and it covers the plant’s root systems. Any excess moisture produced is collected on the bottom of the bed, and is drained back into the reservoir.

You can’t be in the room the entire time. Therefore, you must create a system that provides an immediate alert if something goes wrong. You may even need to hire someone to take over if you are absent for any length of time.

With the roots suspended in the air, the water and nutrients are provided via misting. These nutrients and the water combine with CO2 (carbon dioxide), sunlight, and oxygen to ensure your weed is healthy. As long as the roots receive moisture, that is.

Make sure the temperature for the roots does not exceed 73 degrees Fahrenheit. The ideal temperature range is between 64 and 68 degrees. A water cooler is a handy means of controlling water temperatures. Although it is an expensive item, it could provide massive yields, which more than makes up for the cost.

Ultimately, growers end up with plants that have a high trichome content. 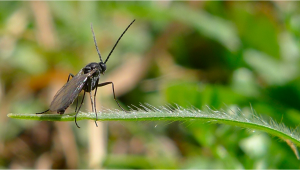 Like hydroponics, growing in aeroponics has a lot of advantages and can result in better overall quality than growing in soil.

As you may know, roots also need water to grow, this is where the sprinklers, reservoir, and pump come in.

As said above, aeroponics doesn’t use any type of medium. The lack of medium causes the grower to need less space per plant. As the roots don’t grow too much because all they need is directly available to them so they don’t need to fight for space.

Aeroponics is a method of growing plants where no soil or any other medium is used, providing the plant a high amount of oxygen and CO2, while also misting the roots with a solution of nutrients to provide what they need to properly grow.

4. Disadvantages Of Growing In Aeroponics

After the excess water has dropped to the bottom of the reservoir, the pump will collect it and take it to the nutrient reservoir where it will be recycled for the next misting cycle or to another reservoir where it can be later disposed of.

Second, aeroponics require water every 5-15 minutes, this means the grow space needs to have electricity available all day long. This causes growers to have to invest in power generators as a backup in case of a power outage.

Aeroponics can be considered a variation of hydroponic growing. It is mostly used where you cannot grow on land, due to environmental issues or as an alternative in indoor growing. This method can be used with cannabis but it’s mostly used with other types of plants, like tomatoes, lettuce, and other common vegetables.

2. How does Aeroponics work?

Aeroponics consists mainly of suspending the roots in the air, unlike growing in soil or other mediums where sometimes there’s a lack of oxygen or CO2. In this method the roots are literally surrounded by oxygen and CO2, thus fixing this problem.

One of the advantages is the ability to have an extra two to three harvests per year, as the roots don’t “fight’ against the soil, so the plants grow faster and more efficiently. This means the plants will need less space, water, and nutrients, being able to produce bigger yields and more trichomes while drastically cutting down water and nutrient usage.