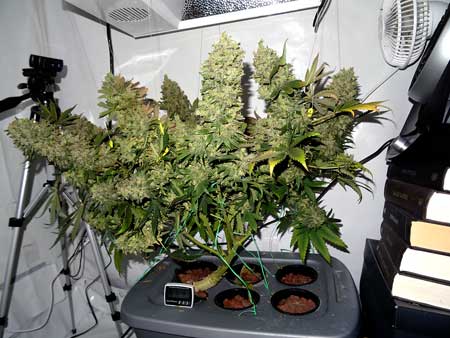 Hydro is a no-brainer for me. Whenever I go back to a hand-watered grow like coco coir, I am always surprised by how much extra time it takes to water plants and remove the runoff. The most intimidating part of hydro is just getting started – after that it’s actually really easy to take care of your plants. In my opinion, hydro is far easier and less time consuming than growing in soil or coco coir once you’re set up. If you are interested in hydro, go for it! If you follow this tutorial you will succeed!

Growing in coco coir can be considered a type of hydroponics since it naturally contains no nutrients and you must provide all the nutrients in the water. However, when you say “hydroponics” most people think of this:

So there are five major parts to getting set up. You need….

Is Hydroponics Good for Growing Cannabis?

When it comes to hydroponic cannabis…

Have you seen cannabis plants growing with their roots just floating in a reservoir of water? This type of hydroponics is known as Deep Water Culture (DWC), and has been around for over a 100 years! As more growers gain experience with this medium, DWC has become increasingly popular for growing cannabis. Hydroponic setups are really neat and offer some big benefits over growing in soil!

No growing medium is used, so the roots expand at a phenomenal rate and amazing growth follows. Some common (legal) crops that are grown using this technique in commercial settings are tomatoes, cucumbers, peppers, zucchinis and even pumpkins.

The idea is to have the growing tray constantly filled with the nutrient solution (and growing medium). The aerator blows air through the perforated hoses on the bottom, keeping the nutrient solution from becoming stagnant. This process is known as aeration, and it’s what keeps the goldfish alive in your aquarium. The rising air bubbles circulate and provide a constant flow of the nutrient solution to the roots of your plants.

One drawback to this method is that the tray has to be flooded three to four times daily, religiously. If you have a job, then your plants will suffer because you won’t be able to feed them sufficiently. This is a good reason to explore automating your ebb-and-flood setup. Use a pump to fill the tray, a float switch to signal when the tray is full and an electric valve that opens to allow the nutrient solution to flow back into the reservoir. An electric timer is also a must-have for this system.

This method is a spin-off of NFT, and the setup is almost the same. What changes, though, is the method of delivering the nutrient solution. Instead of having it flow over the roots, the solution is blown on the roots in a fine mist via a special nozzle, much like the fuel injector on your car. This method is still quasi-experimental, and it isn’t used very often. A major consideration is cost. Another factor is that no way (so far) has been found to keep the nozzles from getting clogged due to nutrient crystallization.

Be realistic about your requirements, space being the first thing to consider and therefore the deciding factor. If you want to squeeze your system into an area barely big enough for it, think about fixing a leak in a pipe with only a few inches between it and the wall. Not good.

If you want to use the ebb-and-flood method because of all of its perks, but you’re not home during the day and you’re no good with electrical things, here’s your solution: Use the same growing tray and medium as you would with the ebb-and-flood method, but don’t use a reservoir. With this system, the reservoir is replaced with an aquarium aerator. Hoses from the aerator are snaked along the bottom of the growing tray, and then the tray is filled with your growing medium.