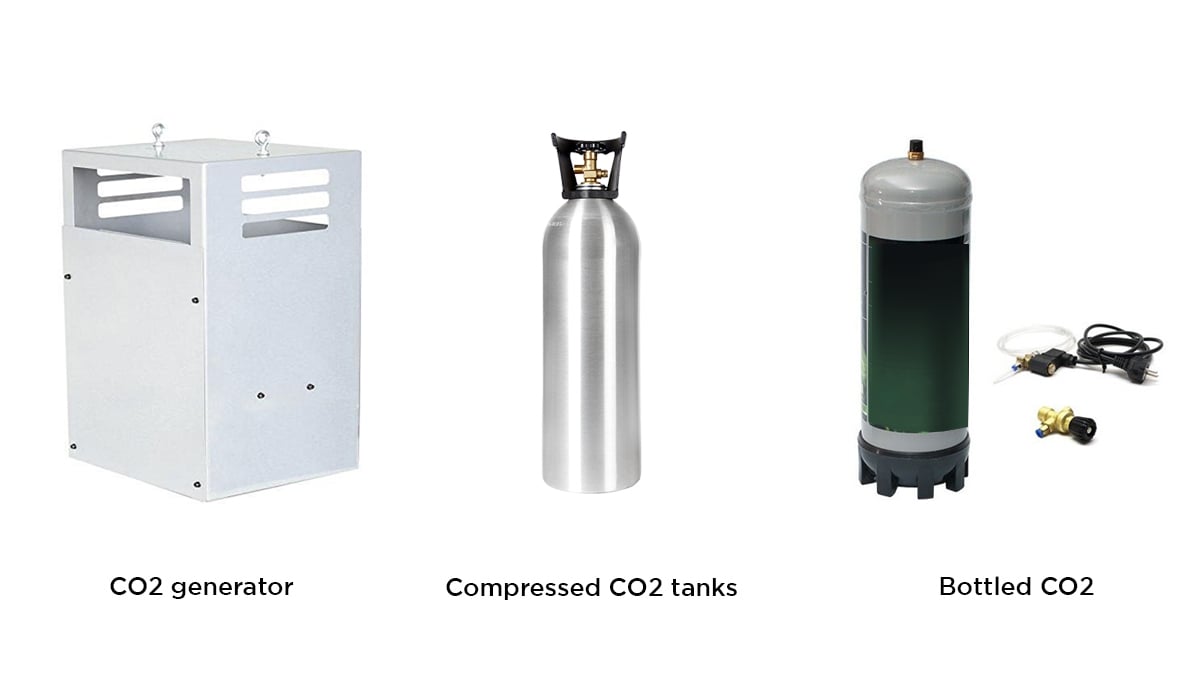 Fermentation is a natural process that produces CO2, making it a cheap and easy method to inject CO2 into your grow tent but has its downsides, for example, fermentation produces a bad odor that can attract bugs to your grow room.

Also, you shouldn’t increase the CO2 levels always, carbon dioxide should be used in combination with a number of factors, without these elements you may be able to see improvement but won’t be what you expect.

If you don’t want to spend too much with any of the equipment mentioned above, there are alternative methods that are cheaper at first but can end up being more expensive either due to the time you’ll spend or simply because they don’t last long and aren’t as effective as the more expensive methods.

Remember that CO2 doesn’t do magic and increasing the CO2 without the appropriate environment will damage your plants.

To properly use CO2, you need to use high-intensity and good quality lights, and according to the type of light you will have to adjust the carbon dioxide levels, temperature and amount of nutrients because cannabis uses CO2 in the presence of light, so the higher the intensity, the more carbon dioxide it will need.

If you don’t want to invest in an exhaust fan or CO2, you can easily increase it by opening your window and letting CO2 in and oxygen out.

But unlike photosynthesis, there are two types of respiration:

This process is common in most living beings, such as plants, humans, and animals, so you definitely know how it works, when talking about plants almost 100% of the water is released, allowing the plant to transport and use the nutrients while making sure the plant “functions” as it should.

Carbon dioxide can be used in the vegetative and flowering stage but plants only need CO2 when performing photosynthesis so you should only inject it when the lights are turned on.

Levels of carbon dioxide have been consistently rising in the world. In 1960, they were a little above 300. They are now above 400 ppm, according to the U.S. National Oceanic and Atmospheric Administration.

Fortunately, trees, plants and other green life need CO2 for their health just as much as we humans and other mammals need oxygen. Plants convert carbon dioxide into energy via photosynthesis. Those CO2-loving plants include marijuana. If you are wondering how to grow cannabis bigger and better, carbon dioxide can play an important part in your strategy.

Kept in metal tanks that look like scuba tanks or propane cylinders, compressed CO2 can be delivered to your pot plants via emitters. Because this CO2 has been produced at a factory, you don’t have to worry about creating heat by making your own CO2 with a generator. That makes compressed carbon dioxide an excellent choice for smaller grow rooms and spaces.

First, boosting carbon dioxide levels should be done in an enclosed space, like a grow room, for obvious reasons. It can be expensive to increase CO2, and you don’t want all that good gas to float away outdoors.

CO2, also known as carbon dioxide, has developed a bad rap in recent years because of its role in global warming. But warming is really not this simple compound’s fault. It’s just that humanity tends to produce too much of it. Carbon dioxide happens to be a very important part of the natural cycle of life here on Earth, but as with anything beneficial, it is possible to have too much of a good thing.

CO2 generators provide one effective means of boosting carbon dioxide for your plants. Burning propane gas or natural gas, these products look like outdoor heaters and produce plentiful CO2. They produce heat too, so they are most suitable for larger spaces and climate-controlled enclosures.

Although studies have shown that plants can benefit from extremely high levels of CO2, amounts above 3,000 ppm can become dangerous for humans. Generally, a level of 1,200 to 2,000 ppm is best for cannabis. Of course, you will also want to ensure your plants get proper quantities of light, water and nutrients.