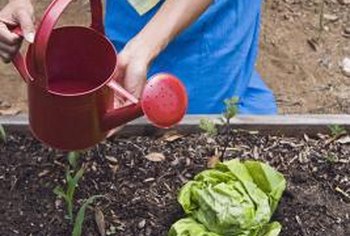 Raised bed gardening is a way to make it easier to reach garden beds, overcome poor soil and provide maximum yields of food crops in minimal space. The beds may be raised as little as 6 to 8 inches or as much as several feet, but elevation alone cannot prevent weed seeds from finding their way in. Weeds sometimes work their way up from underlying soil, but may also land on the bed, borne by wind or other means.

If the bottom of the bed was not lined with a weed barrier, or if the barrier has begun to degrade, weeds can be stopped from the top as well. Landscape fabric or newspaper layers can be used between rows of edible or ornamental crops. The layers can be covered with organic mulch, if you wish. Alternately, organic mulch alone, spread to a depth of 2 to 3 inches around plants and between rows, will deter many weeds, as well as helping conserve soil moisture.

If soil solarization is not a viable strategy, it is still possible to stop weeds before they grow. Before filling a raised bed with soil, line the bottom with landscape fabric, which you can buy at nurseries and garden centers. The fabric is long-lasting and porous, allowing water to pass through while stopping weeds from growing up through it. Though the fabric may be pierced by over-enthusiastic digging, and will eventually break down, it should deter weeds for several years. Though not as long-lasting, newspaper, overlapped and laid several layers thick, can also line the raised bed’s bottom.

Mulch is one of the most important tools in a weed free garden. It doesn’t matter if you’re growing trees and shrubs, perennials, annual flowers, or vegetables, a layer of mulch will be your best friend. Mulch blocks light from reaching the soil, reducing weed seed germination. For ornamental plants, the most common mulching material is bark mulch which is made from shredded bark. In food gardens, straw or shredded leaves are popular for reducing weed growth. Generally a two to three inch thick layer of mulch is enough to reduce weeds. Read more about garden mulches in this excellent article by Jessica.

For more reading on reducing garden weeds and maintenance, check out these articles:

Cover crops are a sneaky way to reduce weeds as well as build soil. If you have a new garden site and want to reduce the weeds, you can plant a fast growing, dense cover crop like buckwheat which is often affectionally called a ‘smother crop’ for its ability to crowd out weeds. It’s also is a great soil builder when tilled or dug into the soil. Just be sure to cut cover crops down before they set seeds. You can also use perennial cover crops like clover as pathway plants between raised beds to reduce weeds and entice pollinators.

4 Tools for a weed free garden:

Landscape fabrics are said to allow water to pass through to the roots of your plants, but I’ve found that water runs off quickly with little penetrating the tightly woven fabrics. This leaves the roots of your trees, shrubs, and perennials dry and the plants prone to drought damage. I have seen weed barrier and landscape fabrics be effective when used in outdoor pathways and patios where they were then covered with a thick layer of pea gravel. Generally though, they cause more garden problems than they solve.