Mature trees have thick bark that protects them from many postemergent foliar herbicides, but pick the herbicide carefully to ensure it won’t soak into the tree’s roots. Those containing glyphosate, for example, typically are safe to spray around mature trees. The chemical doesn’t leach through the soil, so it shouldn’t reach the tree’s roots. Sethoxydim, another herbicide active ingredient, also is deemed safe to spray under trees to eliminate grass and weeds.

Even safe herbicides can hurt your tree if not applied carefully. The spray saves you time and labor when you want to rid the drip line of weeds and grass, but without the proper precautions, you can inadvertently harm your tree. Cover the trunk base with plastic or cardboard to prevent herbicide drift, which is where droplets blow in the wind to hit unwanted areas. Bark typically protects a mature tree, but green and thin barks are vulnerable. In addition, sprays can sneak into small chinks in the bark, such as cuts from a weed trimmer. Covering suckers, or immature trees that shoot up from the trunk base, prevents the young bark from absorbing the chemical into the main tree’s system. Removing suckers as soon as they appear eliminates this concern. Choose a day with no wind so that droplets don’t float over to the tree’s leaves; a few drops won’t harm the tree, but a significant amount can stress or kill it.

Grass and weeds under your favorite tree’s canopy can look overgrown and messy, but more important, they compete with the tree for moisture and nutrients. Finding the right herbicide to spray under your tree saves you the hassle of hand-pulling weeds and grass without harming the tree, but you must apply the herbicide properly to prevent accidental damage to the tree.

Pick the Right One

Many pre-emergent herbicides, or those that keep weed and grass seeds from germinating, are granules you spread and mix into the soil around your tree. These work only before seedlings appear, and they aren’t effective against grass that creeps in using rhizomes. Postemergent herbicides, however, often appear in spray form, allowing you to dose large areas under the tree or pick a single plant to target with the liquid. Many of these travel into the plants through the leaves or blades, killing them from within. Read the label carefully and apply only at the recommended rates; some herbicides can affect woody plants if applied at high rates.

Instead of constantly monitoring the area under the tree with herbicide spray in hand, take steps to prevent weeds and grass from getting a foothold. Mulch under the tree to help prevent seeds from germinating. A 4-inch layer of mulch won’t completely prevent weeds from germinating, but they will be easier to pull before they become established. For extra protection, place landscape fabric under the mulch. The landscape fabric prevents seeds and sunlight from reaching the soil. Unlike plastic, landscape fabric is a woven material that allows water pass through to the tree’s roots.

Based outside Atlanta, Ga., Shala Munroe has been writing and copy editing since 1995. Beginning her career at newspapers such as the "Marietta Daily Journal" and the "Atlanta Business Chronicle," she most recently worked in communications and management for several nonprofit organizations before purchasing a flower shop in 2006. She earned a BA in communications from Jacksonville State University. 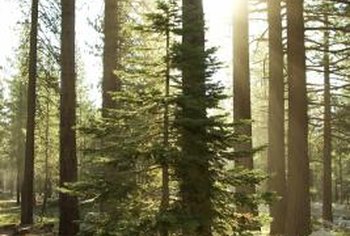 Cultivation is the practice of weeding and tilling around the base of trees to get rid of unwanted weeds. Although cultivation can theoretically be used as a primary weed prevention method, many gardeners do not want to spend enough time cultivating to get rid of weeds with this method alone. Therefore, it is a good idea to cultivate an area before planting pine trees and before applying mulch around the bases of the trees. Gardeners should simply use a hoe or shallow tiller to remove weeds when the soil is moist after irrigation or rainfall.

Many gardeners dislike weeds growing around their pine trees. They make a yard look less cared for, and they can spread from the area beneath a pine tree to a nearby vegetable garden or landscape. Weeds also compete with trees for water and soil nutrients and can reduce the health and size of trees or other plants that they grow near. A combination of weeding and mulching is usually the best way to keep weeds from growing under pine trees. Herbicides are not recommended because some can harm pine trees can can be difficult to apply.

Plan on applying at least 3 inches of mulch to sufficiently prevent weeds. Apply the layer all around the base of the pine tree, but make sure to keep the mulch at least 6 to 12 inches away from the tree trunk. Mulches hold lots of moisture, and trees tend to have problems with diseases and insects when their trunks are consistently wet. Do not apply organic mulch over fabric mulch, because these mulches layered over each other can cause weeds to germinate.

After removing weeds through cultivation, applying a layer of mulch works well to prevent more weeds from growing in the future. Mulch has an initial cost and takes some work to spread, but it does not require very much maintenance. Mulch also provides extra nutrients to the trees and helps the soil retain moisture.

An organic mulch, such as a mulch made from bark and fallen pine needles, works well to prevent weeds and return nutrients to the soil. Organic mulches may need to be reapplied about once per year, because they break down over time. Fabric mulches are a longer lasting option, and they can work for as long as 10 years. However, many gardeners find fabric mulches unattractive, and they also do not add nutrients to the soil like organic mulches do. The type of mulch to use around a pine tree is a matter of personal preference.

If weeds start popping up in mulch, we want to tackle them before they can seed and spread. If you’re pulling weeds by hand, make sure you get the whole weed, including the root. Applying a pre-emergent herbicide is also an option. One approach is a commercial weed-killer like Roundup, which contains the chemical glyphosate. Some gardeners prefer a more natural approach, using a mixture of vinegar, salt, and dish soap to kill weeds as they grow.

For flower beds and landscaping, we like a chipped or shredded bark mulch with a relatively coarse texture. It decomposes relatively slowly and doesn’t blow away so it can do its job and keep sunlight from reaching the soil. Inorganic mulch (like stones or gravel) does an excellent job of preventing weed growth. However, it doesn’t offer the soil-improving benefits of organic mulch.

As experienced gardeners know, fighting weeds is a never-ending battle. They seem to pop up no matter what you do. But there are proven strategies for preventing them, and mulch is one of the best tools available. Working with a professional for your landscaping needs, including mulch application, is the best way to make sure your weed control program works.

We often find weed seeds in old or contaminated mulch. Seeds can also get distributed by birds or wind into new beds.

Applying mulch every spring makes sense on several levels. It helps enrich the soil and helps retain moisture during the dry summer months. But the main reason most of us mulch is weed control. We faithfully lay down a couple of inches of mulch and cross our fingers that we’ve won the battle. But most of us aren’t so lucky: weeds almost always find a way to pop up, even in the most beautifully mulched landscaping. Why are weeds so hard to tame, and what can you do to stop them? Here are a few tips:

We all know how tenacious weeds can be. They thrive on the very same things your garden does: sunlight, water, and nutrients in the soil. Weeds take pretty much any opportunity to grow and aren’t picky about where they take root. As plant-based mulch decomposes, it provides an attractive, nutrient-rich environment for weeds to take root.

How Can I Kill Weeds in Mulch?

Here are a few strategies for preventing weeds from popping up in your mulch:

At Epling, our experienced team knows which type of mulch to use in different locations. We apply just the right amount for each job, both for weed control and curb appeal. We have herbicide use down to a science and know which kind to use, both before and after mulching. This spring, put the focus on spending time outdoors with family and let our pros at Epling take care of the weeds.