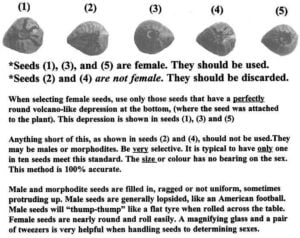 While it would be much easier for growers to be able to sex their cannabis seeds, the simple fact is that there’s no way to do it. However, sexing plants early on during their growth period is not only essential, it’s completely possible. Growers can even do it before their plants enter the flowering stage if needed. Then male plants can be removed and growers can enjoy a nice, full crop.

One of the biggest myths of sexing cannabis seeds comes from a popular chart online.

The chart states that one can determine the sex of a cannabis seed by just looking at them. Within the chart, five cannabis seeds are shown. Three of these are female and two are male, supposedly. This chart says to look for a crater at the bottom of the seed. It explains that females will have a depression that is perfectly round. While males will have a crater that is misshapen and not uniform. However, this is simply not true. The craters found in cannabis seeds have nothing to do with the sex of a seed.

Common myths on identifying the sex of a cannabis seed

Of all the things that can trip a grower up, sexing marijuana plants may just be the trickiest. Sexing plants is so important because growers are typically after the female plants, that produce the huge THC covered buds. Or the medicinal relief that CBD strains can bring. With such opposite effects of male and female plants, it’s easy to see just how important sexing plants is. But what if growers didn’t have to wait to sex their plants? While it would certainly make life easier, is sexing cannabis seeds possible?

So where do all the myths from sexing cannabis seeds come from?

Growers know that hermaphrodite plants can be just as harmful to crops as male plants. Therefore, it’s very important that every grower understand how to sex marijuana plants. Particularly if they’re not using feminized marijuana seeds that will give them only females.

Can you determine the sex of cannabis seeds?

Typically, marijuana plants cannot be sexed until they have already begun to grow. Cannabis seeds will look somewhat identical and plants in the vegetative stage will also look identical,. As the plants move into their flowering stage, they will start to show very clear signs as to what sex they are. While it would be much more convenient for growers to be able to determine sex before this point. The sad truth is that it’s just not possible.

While growers may not be able to determine the sex of a seed, does the environment have anything to do with it? This is something else that has been hotly contested online.

How? The reason is that once pollinated, cannabis plants will cease devoting energy to growing flowers and will tell the existing flowers to stop producing resin, which translates to making less buds and less THC. That energy will be devoted to producing seeds instead. Think of the plant as a battery with a set amount of power. When that supply is spent in one area, it won’t be available for another.

Now consider that a single male plant can spread its pollen to an entire room of females.

W hen it comes to growing cannabis, sex is important. Not that kind of sex! We’re talking about the sex of the plant, and whether it is male or female. The reason for this is simple enough: only female seeds produce flower, also known as the buds you might have in your stash as we speak.

If a grow is accidentally pollinated, that means the resources that were spent to bring the plants to that stage — the water, soil, electricity, fertilizers, not to mention the price of the seeds themselves — will have been wasted growing weed that can’t be smoked.

In the colloidal silver feminizing method, distilled water is mixed with pure silver and sprayed on female plants. This method works best when the plants are flowering. This results in pollen sacs being formed, which will allow the seeds to produce female plants.

All of those male plants will have to be carefully separated from the grow space and destroyed, or else the growers risk another disastrous accidental pollination. It takes minuscule amounts of pollen to pollinate a plant, so growers must take extensive precautions to eliminate potential contamination. In addition to helping mitigate other contaminants, this is one of the main reasons that many workers will don full-body suits when working in a grow room, ensuring that accidental pollen exposure is kept to a minimum.

While it’s basically not possible to determine the sex of a seed from a random bag of seeds, a practice known as feminizing is quite popular. Feminized seeds are selectively bred to produce only female plants.

If you have some experience growing cannabis and would like to bend a crop to your will to ensure that the seeds will be female, there are a few feminizing methods you might try. One such technique is to literally stress out a healthy female plant by interrupting the light cycle during flowering, called Rodelization Feminizing.

As anyone with seasonal allergies can attest, it only takes a little bit of pollen to have a big impact. The reason that growers are so intent on weeding out male cannabis plants is that a single pollinator can negate an entire potential harvest.