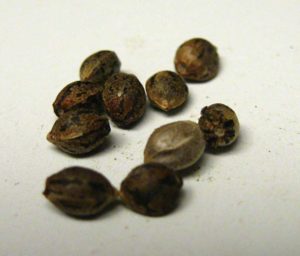 The main problem with seedy weed is that you are getting less smokeable bud for the amount of total mass there. If buds are seedless, you get more bang for your buck. Seedless buds are known as “sinsemilla” (“sin semilla” is Spanish for “without seeds”) and are considered to be the highest quality and most potent type of weed.

Mature cannabis seeds are typically dark brown or tan (the brown is a coating that can be rubbed off), and relatively hard. Very pale or white seeds usually won’t sprout.

Are “found” seeds good to grow?

I’ve seen some growers get impressive results with bagseed (seeds you find), but results may be hit or miss. Plants can grow in odd ways and the yields or quality may not be as expected.

Seedy buds are the result of pollination. What does that mean? Cannabis buds are flowers. Like other flowers, they make seeds when pollinated. Cannabis buds get pollinated when they come into contact with cannabis pollen while the buds are forming.

The biggest problem is that seeds often don’t “breed true” to the buds that they came from. The resulting buds may end up nothing like the buds you found them in.

Does it mean the weed is bad?

These seeds have germinated