Four high school friends who are entering their last year – Lily, Chloe, Amelia, and Rebecca – are generally fooling around, smoking weed, dealing with their family problems, and generally talk about strenuous relationships, boys, proms, vulgarity, and weed. As they head into their final year, they start dealing with the losses in their lives: the pain of losing their friends, the parting of ways owing to jobs, and the typical withdrawal symptoms one faces while leaving school for the last time. About the weed, there’s a donkey-kong shaped bong named Donkey Bong that has been repeatedly focused upon throughout the film, without any reason; however, apparently, it consumed a lot of the film’s budget. The movie was criticized and appreciated equally and remains to be one of the best Lucy Hale movies out there.

Snoop Dogg and Wiz Khalifa are two high school students (HIGH school, get it?). Snoop Dogg must graduate, and Wiz Khalifa has to help him while struggling to write his valedictorian speech. This film is only good if you smoke something while you are watching. There is a little bit of everything: musical breaks in-between scenes and a lot of jokes that will make you laugh. Although the plot does not have a lot of substance to it, it has some good moments and is worthy of a one time watch if you don’t have anything else to do other than being stoned. Or at least, pretending to be.

One of the best Bollywood films in recent years, ‘Udta Punjab’ is set in the Indian state of Punjab which has been going through a massive drug problem for quite a few years now. This film vividly depicts the widespread use of narcotics in the state by following the lives of some characters across the film. First, we meet a Punjabi musician whose use of cocaine affects his creativity. His manager sends him to a farm where a girl called Kumari Pinky gets caught up in another serious drug-related matter. Fighting against this social problem is Preet Sahni, a doctor, and Sartaj Singh, a policeman. The film connects the lives of these four characters in what becomes a brilliant thriller as well as a powerful social drama. An impressive screenplay laced with doses of black humor coupled with powerful performances by the four leading actors makes ‘Udta Punjab’ a must-watch.

If you like to smoke then odds are that you know about this ultimate stoner show. Travel back to the 70’s and watch Eric Foreman (Topher Grace) and his group of friends Jackie (Mila Kunis), Kelso (Ashton Kutcher), Hyde (Dany Masterson), Donna (Laura Prepon) and Fez (Wilmer Valderrama) living the teenage life in Wisconsin. Also, Tommy Chong does occasional appearances in case you needed some reassurance.

Cheech And Chong: Up In Smoke
One of the stoner shows you need to watch

If you haven’t tried Delta-8 THC yet, you really need to give it a shot. Some people actually prefer it to regular cannabis because it keeps them functional while medicated.

In fact… Sparking up will greatly enhance any experience

Disjointed
The life of a dispensary owner in LA

Let’s kick things off with the funniest movies to watch while stoned. Nothing beats a good stoner comedy with a ridiculous plot and some hilarious scenes that give you the giggles. So if you’ve already smoked up… Login to Netflix and hit play on one of these awesome weed comedies. 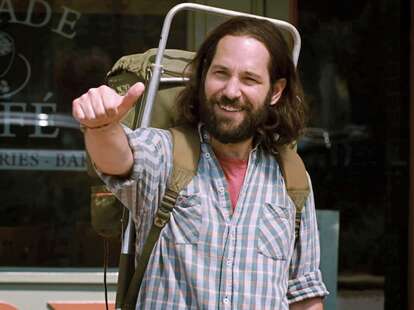 While Netflix has always made sure to keep a few stoner movies in its catalog, the streaming giant is now also contributing to the genre with its original offerings, mining the way so many people watch while sewn into their couches. If you’re looking for stuff to fire up when you’re out of Planet Earth episodes, grab some munchies and enjoy the movies below.

These are the chillest, funniest movies to stream when you're stoned as hell.

Need more options? Check out our guides to the Best Horror Movies on Netflix and the Best Thrillers on Netflix.

Can’t get into college? Make your own! That’s the premise behind Steve Pink’s Justin Long-starring comedy, and it’s just as difficult as it sounds. Blake Lively, Lewis Black, and a very young, very funny Jonah Hill round out the cast for a whole course load full of shenanigans. The coed comedy has its fair share of partying and crude jokes—it is a slacker’s dream to get a degree in skateboarding or psychokinesis—but somewhat surprisingly, this one’s really one for the stick it to the system underdogs out there.