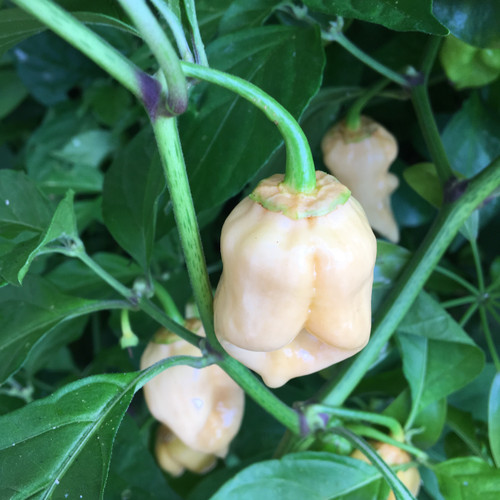 The 7 Pot pepper was originally grown in Trinidad, and there are several different colored strains, including the Red 7 Pot, White 7 Pot, 7 Pot Brain Strain, Chocolate 7 Pot, 7 Pot Primo, Yellow 7 Pot, and 7 Pot Douglah. The 7 Pot pepper is related to the Trinidad Scorpion pepper, one of the hottest peppers in the world.

Commonly called Bubblegum because despite the great spiciness, around 800,000 Shu, it has a sweetish aftertaste that would recall the well-known chewing gum, the white / ivory variant instead has a sweet flavor suitable for fusion dishes, fish, vegetables and sauces.

The Bubblegum White is definitely one of the most beautiful chillies in the world, with a white / ivory color and a squat shape. Like all Bubblegums it has the unique peculiarity of having the glass of the same color as the fruit’s body, making this Pepper a living color poem. In my humble opinion, Bubblegum, on my site you can find red, orange, yellow, peach and chocolate colors, together with Pink Tiger and Thunder Mountain Longhorn are the most beautiful peppers in the world.

A sachet of this rarity contains 10 Isolated Seeds that will guarantee you an excellent harvest.